I've made a lot of stink in the past year about Pernod and their misinformation campaign, but there are other brands that have been just as difficult to deal with, if not moreso, and whose advertizing campaigns have proven detrimental to the idea of informing today's absinthe consumer.

I had my first dealings with Crillon a few years ago when they sent me a bottle of Grande Absente to review. The product itself was billed as an authentic 18th century recipe; one that included grande wormwood, thus qualifying it as real absinthe. Well, suffice it to say, the product itself was middle of the road, at best: harsh star anise flavor and artificially colored. The spokesman I talked with over the phone was surprised to hear I didn't find it great, which should have told me something.

Over the next two years or so, I'd run across some of their marketing, which was for the most part, misleading and/or incorrect, but I didn't think much of it, since it didn't seem to be a very popular brand in the U.S.

Fast forward to a few weeks ago.

While surfing around on Facebook, I ran across a new fan page called 'Absinthe - The Green Movement'. While it seems to be putting itself out there as an absinthe resource, it is in fact run by Crillon as a main page for all four of their brands. Due to their marketing ventures, the page has quickly garnered more than 8,000 members, which in my estimation is more than any other absinthe brand. A shame to say the least.

As I began to read through a lot of the posts made by the brand reps, I couldn't believe my eyes. A large amount of what they were posting was blatantly false and/or misleading. I reluctantly 'liked' the page, solely to enable me to comment on their posts, and correct some of the information. Well, let's just say they didn't like that too much. They got defensive quite quickly, and within a week or so, suspended my priveleges to post, and erased my comments. Apparently, they prefer censorship to true education.

Because of the huge following the page now has, I felt it was important for me to call them out on a lot of their statements. So that's what this post will be about. I'm going to break it down into several sections: Brand, Irresponsible representation, Absinthe History, and the dreaded Thujone. 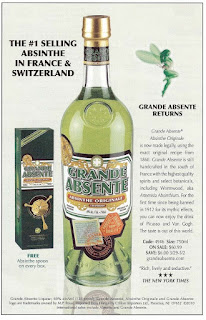 BRAND
1) In one advertisement, they claimed that their brands are the best selling brands in France and Switzerland.

Well, since we know that Switzerland has a law that prohibits artificially colored absinthes from being sold in their country, we know for a fact that their claim cannot be true, since all three of their original brands are all artificially colored.

2) In multiple ads and FB posts, their representatives claimed that their brands were now being made with Northern Wormwood, which they claim make it authentic. There are two possibilities here: 1) The reps are so uneducated that they don't know that Northern Wormwood is not the same thing as Grande Wormwood, or 2) They aren't really using Grande Wormwood and they accidentally tipped their hats. My guess is the former, but unless we are able to examine their herbs, we'll never know.

IRRESPONSIBLE REPRESENTATION
On multiple occasions, I've seen the brand reps commend or endorse practices that can be extremely dangerous and/or illegal. A couple of examples:

1) On their flikr page, they featured a bar which lights their absinthe on fire, then had the patron first huff the fumes, then down the shot. As I mentioned there, the brand might have a legal battle on their hands when someone burns their mucous membranes by inhaling strong, hot alcohol vapors.

2) On their FB page, they rebuked me for criticizing a gentleman who was bragging about passing out a homemade 'bathtub' absinthe. They fully supported his actions until I explained to them the seriousness of their endorsement. Not surprisingly, they pulled their comment soon after, yet still published another comment criticizing me for calling them out. Here is the passage: 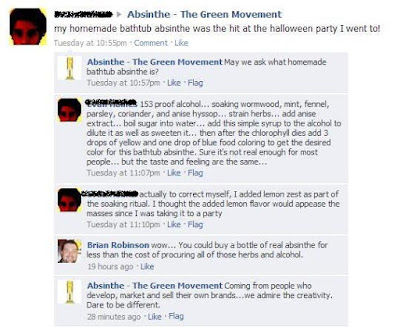 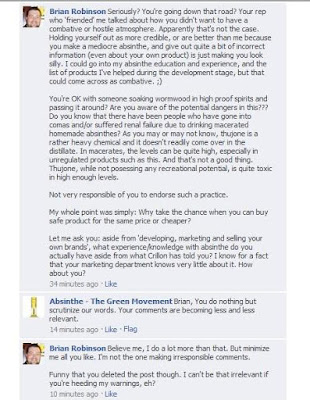 Shortly after the exchange, all of the comments were removed, apparently after they realized what they were endorsing.

ABSINTHE/BRAND HISTORY
The reps are a total mess here. I wouldn't be surprised if they just make stuff up, or at the most, do a cursory google search before posting something. Some of the highlights:

1) Absinthe was a treatment for malaria (no, it wasn't)

2) They claim that Absente was the first absinthe available in the U.S. market since 1912, and was available years before any other brand. This is misleading because the original Absente did not contain wormwood (the herb that gives absinthe its name), thus can't be considered real absinthe by any rational argument.

3) They claim that their product comes closer to original absinthe recipes than the majority of products made in the U.S. or Europe. Yet, on their Absente page, they also claim that they don't know what absinthe tasted like back in 1915. Try as I might, I can't figure out how both statements can be true simultaneously.

4) On their Facebook page, they claim: "We are committed to providing our consumers with only the highest quality absinthes possible by adhering to the same ingredients and artisinal methods used in the mid 1800's through the turn of the century." Three things wrong with that:

THUJONE
Here is where I feel the most irritated. Mainly because they claim to be educating the public, but in reality, they are being complacent in leading consumers to believe that thujone is an important part of absinthe. I think they believe that if they truly make an effort to play down the importance of thujone, they will lose customers who are buying absinthe strictly because they think thujone is a drug or has some recreational potential.

Instead of telling the truth, which means letting people know that the legal limits of 10mg.l in the US and 35mg/l (for bitters) in the EU essentially means thujone free, i.e. NO THUJONE, they instead use their best marketing speak to say they contain the MAXIMUM amount allowed by law. While what they are saying is most definitely true, it also reenforces the belief that more thujone is desirable. 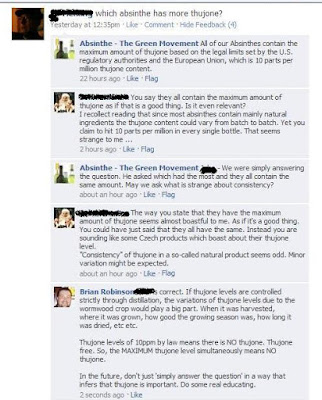 If they were truly interested in educating the public they could simply reference the recent studies that show that pre-ban absinthes, for the most part, didn't contain much thujone, contrary to previous assumptions.

But I think that might be just too much work for them. I think they'd prefer to retain those potential customers by luring them in with MAXIMUM thujone amounts.

So, in conclusion, looking at the facts, one can only conclude that Crillon and their brands care more for extravagant marketing than they do about creating a superior product. Why is it that so many of the firms that have the most available capital tend to skimp on the product?

If Crillon had any sense about them, they'd hire someone who actually has a large amount of experience with absinthe and its history to work with their marketing department.