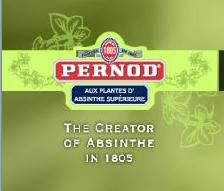 As Pernod begins to revamp their current absinthe product (we'll talk more about that later) with a brand new website and a new label, they are making more and more claims about their 1805 distillery in France being the first absinthe distillery.

A similar statement is also made on their label, again suggesting that the distillery in France was the first absinthe distillery.  Really? This doesn't match the information on Pernod's own website, where it states:

"At the end of the 18th century, a man by the name of Major Dubied began distilling the elixir professionally. A few years later in 1805, his son-in-law, Henri-Louis Pernod, opened a distillery in France."Collectors have located and posted a 1896 Maison Pernod Fils promotional booklet [PDF] which states:

"Little by little, however, thanks to its fragrance and pleasant taste, the elixir came to the attention of not only the sick, but to that of more and more fans, so that the recipe had already acquired monetary value when when Mr. Henri-Louis Pernod acquired it to exploit it commercially. This happened in 1797. It was at that time the first absinthe factory was built. The establishment was created under extremely modest conditions, even for Couvet; the building where the industry was born still exists; it measures eight meters long by four meters broad by four meters high. Subsequently enlarged, the factory was not long in becoming too small and, in 1805, Mr. Pernod not being able to satisfy demand by the French customers which had taken to his product with a marked favor, fixed upon Pontarlier as the place to avoid the high taxes levied by the tax department upon Swiss Absinthe."

In short, literature produced by Pernod in 1896 and on their internet site today contradicts the 1805 claim at the top of the article: Switzerland, and in particular, Couvet remain the birthplace of absinthe, despite Pernod's attempt to annex it!  Not to mention the fact that the evidence above shows Pernod wasn't the 'creator' of absinthe.

Having researched absinthe's history for years, I've run in to multiple accounts of the controversies surrounding absinthe, and its prohibition throughout much of the world in the early 1900s.

Many of the myths surrounding absinthe, such as its ability to case hallucinations were largely popularized during the 1990's, during the rise of 'Bohemian style' absinths, which bear no resemblance to the Belle Epoque products of France and Switzerland. Mentions of hallucinations during the Belle Epoque were in relation to end-stage alcoholic patients who were going through alcohol withdrawal in sanitariums, and were not directly related to absinthe consumption specifically.

However, on Pernod's website, this passage can be seen:

Why would a brand which was victimized by prohibitionist fears and competing interests during the Belle Époque use the same information that was once used to bring about its demise? Has Pernod eschewed quality, integrity and truth in favor of a campaign that attracts a crowd that cut its teeth on Bohemian brands looking for the next high?

Well, why don't we take a look at the product itself? From Pernod's marketing material:

Pernod® Aux Plantes d'Absinthe Superieur is based on the original absinthe recipe and today returns to restore its reputation for quality and handcrafted excellence. This 136 proof spirit is distilled from three primary ingredients, Grande Wormwood, Fennel, and Star Anis producing a light green and hint of amber color with a dominant flavor of anis, balanced with wormwood and a citrusy finish.

Having tried samples of Pernod Fils from multiple bottles ranging from the late 1800's through its Spanish brands in the 1960s, the new product bears little resemblance to the original. In a sense, the above statement is true (you can base a recipe on something, but have it be completely different). But in the same sense, ALL absinthes are loosely based on the same original recipe.

Here are some comparisons.

1)Pernod Fils absinthe of the Belle Epoque was naturally colored by soaking herbs in the distillate and drawing out the chlorophyll. The new brand is artificially colored as noted on its label.

2)Pernod Fils absinthe of the Belle Époque used a recipe with high quality wormwood. The new brand has a barely detectable wormwood flavor. What flavor is there doesn't speak to high quality herb choice.

3) Pernod Fils absinthe of the Belle Époque had a flavor that was dominated by high quality green anise. The new brand has the telltale flavor and aroma of lower quality star anise. Which by the way, is SIGNIFICANTLY cheaper as well.

4) Pernod Fils absinthe of the Belle Époque exudes quality and points to high quality base alcohol and herbs. The new brand does not. It would not surprise me in the slightest if I found out much of the flavor came from oils and extracts as opposed to distilled herbs.

5) During the Wormwood Society's first annual blind tasting event, held in September of 2009, Pernod absinthe scored 17th out of 22 brands. Below Pernod were Le Tourment Verte, Mata Hari, La Fee, Koruna and Green Fairy. Several of those aren't even considered absinthes by experienced drinkers. That doesn't point to quality.

Make no mistake. Pernod Fils was THE gold standard of absinthe during the Belle Époque. I just wish they took the time to employ the same level of quality and care in their new brand. Especially since they advertise it as a product of high quality. It's extremely disappointing to see the direction the new product has taken. It's even more disappointing to see so many of their regional reps having little or no education regarding absinthe, its history and its preparation.

For reviews of Pernod absinthe, please check out the Wormwood Society's review page.

*Footnote: Calls and emails to Pernod to get their comments on the above have not been returned.