In 1918, Aleister Crowley, the British occultist and writer, composed a lyrical essay on absinthe and aesthetics titled “The Green Goddess.” He wrote his essay not in London or Paris, but in New Orleans – the absinthe capital of the United States. “Art is the soul of life,” he decreed, “and the Old Absinthe House is the heart and soul of the old quarter of New.” The establishment he was referring to is still located at 240 Bourbon Street, on the corner of Bourbon and Bienville. 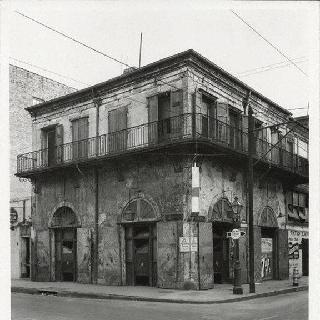 Constructed by Pedro Front and Francisco Juncadella in 1807, the site was purchased from Dame Marie Car on March 23, 1806. The ground floor originally served as a grocery market, while the top floor was a private residence.

The grocery was known as “Front and Juncadella” and specialized in imported European foodstuffs, especially goods from their native Barcelona, Spain.

The Federal-style two-story Creole townhouse has virtually remained unaltered since its completion in 1807. The symmetrical openings of the stuccoed building are complimented with a light balcony, so as not to detract from the clear and concise massing. Similarly, there are no exterior openings indicating the entresol level.

The semi-circular tops of the arches are fitted with operable sashes hinged as casements. After 1820, the entresol was generally expressed on the façade as a distinctively separate floor with its own rectangular casement openings.

The ceiling of the commercial space, which doubled as the entresol floor, has since been removed, thus creating one large bar room below what is now a dining room. Before its removal, the ceiling was covered in hundreds of $1 bills. The original ceiling was about 12 feet off the ground, but it seemed much lower due to the appearance of a much higher ceiling from the exterior.

After Juncadella’s death, the ground floor changed from a grocery to a shoe repair shop in 1813, then back to a grocery until Aleix’s Coffee House was established by Juncadella’s nephews in 1815. It was here where absinthe was first served in New Orleans.

In 1870, Cayetano Ferrér, who was also from Barcelona, started working as a bartender after serving drinks at the basement bar of the French Opera House. He would become renowned for his absinthe in New Orleans.

In 1874, he took control of the lease of the building and the establishment became known as the “Absinthe Room” because of the high demand and popularity for absinthe. The business later became known as “The Old Absinthe Room” until 1890, when it formally changed to the “Old Absinthe House.” Eventually, the bar became a local landmark, attracting the likes of William Thackeray, Mark Twain, Walt Whitman, Jenny Lind, Aaron Burr and Oscar Wilde.

“Absynthe” appears in New Orleans liquor advertisements as early as 1837, but its popularity didn’t boom until the latter half of the 19th century. This was partly attributed to Ferrér, who was acclaimed for serving absinthe in the French style – marble fountains dripped cold water onto lumps of sugar suspended on perforated spoons over glasses of absinthe until the concoction achieved the tippler’s desired level of sweetness and dilution. 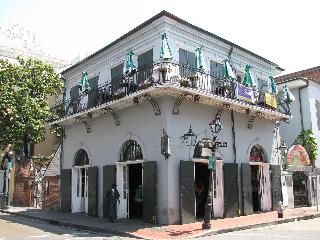 Operations ceased and the doors to the bar were nailed shut by the U.S. marshals during Prohibition (1919-1933). It was during this period that Pierre Casebonne bought the cash register, the paintings on the wall, the old water dripper and the marble topped bar. All of these treasures were hidden in what was then called the “Old Absinthe House Bar” located at 400 Bourbon Street. The removal of the bar and fountains essentially saved them from being destroyed by supporters of Prohibition.

The fountains and bar were returned to their original site in 2004 and can still be seen at the Old Absinthe House. The marble bases of the granite fountains are pitted with small divots from the water, which fell from the brass faucets a single drop at a time. Each fountain includes a brass figurine, which sits perched above, watching every pour, the most notable featuring Napoleon.

A 1934 article in Time magazine declared New Orleans the absinthe capital of the world. L.E. Jung & Wulff Company was known as “the big New Orleans absinthe firm,” and according to Time, sold 1,500 cases of absinthe following the repeal of Prohibition. The company finally ceased selling the drink after being notified that repeal or no repeal, absinthe was still illegal in the United States.

Similar to the Napoleon House, the Old Absinthe House has a tradition of being the setting for local plots and conspiracies. The most famous is the tale of Jean Lafitte and Andrew Jackson meeting at the famed bar in late December of 1814 to plan the American position for the Battle of New Orleans. Legend says they met on the second floor and devised a strategy to defend Louisiana from the invading British forces.

The building remains very much today as it appeared in 1807. Various shutters have come and gone, but the original openings and balcony elements are still standing strong. The building is a great example of a simple design that is also practical and appealing.

The Old Absinthe House remains open to the public and welcomes anyone interested in learning more about the history of absinthe in New Orleans. 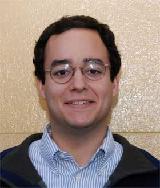 Stephen McNair is an architectural historian and preservationist living in New Orleans. He will periodically write about historic buildings in the city. He says that if you took almost any building in the French Quarter and placed it in another city, that it would become the most interesting building there. Here, he feels that some take N.O.’s unique and historic buildings for granted, so he’ll offer his perspective on some of the more and less well known historic buildings in our city.

This is taken from an article published in the New Orleans Times Picayune newspaper on Sunday, May 11, 2008. Photos courtesy WWL-TV – New Orleans