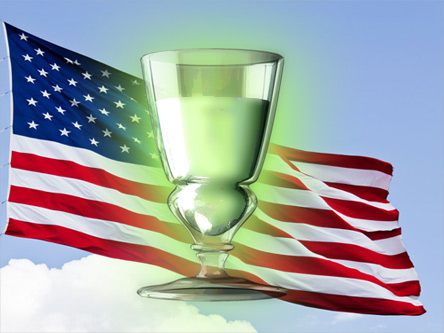 Authentic Absinthe Is Legal In The USA After 95 years—from 1912 to 2007—real absinthe is again legally available and being imported, manufactured and sold in the United States.

It’s not factually correct to say that it’s been “legalized” because no laws have changed and no ban has been lifted: absinthe has been technically legal since at least the 1960s, possibly as early as the 1930s.  So, what happened?

Contrary to some claims, federal bureaucrats were not pressured into legalizing absinthe. It was merely demonstrated to the apprpriate agencies that it was already legal.  Due to changes in the understanding of these regulations on the parts of both the agencies and absinthe producers, genuine absinthe is once again available legally in the US.

The law1 states that all foods and beverages containing any Artemisia species must be “thujone-free”.  However, according to the statute, “thujone-free” does not literally mean “zero thujone.”

In order to determine thujone content, an official method for thujone analysis was prescribed.  Although the information has been published and accessible since the 1960s, it was not widely known that the threshold of tolerance—the fudge factor—for this method was ten parts per million (10 ppm), about 10 mg/L.

This effectively legalizes many absinthes, since authentic absinthe contains only minute traces of thujone in the first place. The highest thujone levels so far detected in pre-ban samples is 48.3 mg/L, the lowest was “none detected.” 2  Many pre-ban era absinthes would be legal in the US today by modern government standards.

How do absinthes available in the US compare to those only available in Europe?  First of all, most of the brands available in the US are made in Europe and are the same brands sold there. It’s been demonstrated by analysis that many of the alleged high-thujone faux absinthe products contain no more thujone than ordinary absinthe, and in some cases none was detected at all. In some parts of Europe, marketing and labeling claims are not well-regulated.

In 2008, the limit for thujone from Artemisia species in alcoholic beverages in the EU was raised from 10 ppm to 35 ppm, a 25 ppm difference over the rules of the US. These are trace amounts—literally 25 parts out of a million—the difference is negligible.

Many of the absinthes made in the US are made strictly according to the same 19th century protocols as those made today in Europe, with all of the same ingredients, in amounts comparable to those in pre-ban absinthe.  They are literally the same as many absinthes made 150 years ago, and are widely regarded as among the finer absinthes available anywhere.

In addition, it was actually a handful of detail-obsessed American absinthe geeks who spearheaded the global revival of authentic absinthe making, years before absinthe was reapproved here.

When in doubt about the authenticity or quality of a particular absinthe brand, always consult our Absinthe Review section.