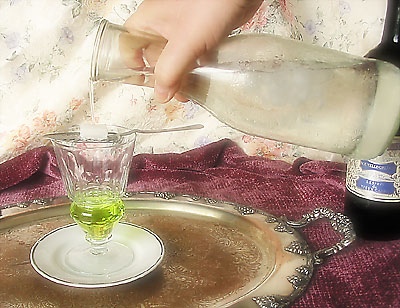 Absinthe: The Rise, Fall and Resurrection of the Green Fairy

Looming like a succubus in shadowed, febrile dreams, absinthe awaits you patiently; she knows you will come to her.  As all who explore the world of spirits—eventually, inexorably—you will be drawn to the Emerald Muse…

No drink throughout history has inspired so much fear, awe and allure as absinthe.  That’s no small accomplishment considering that its prime years spanned only several decades and its life, from birth to ban, spanned little more than a century, but what a century it was!

The end of the 18th century in France, the cultural center of Europe at the time, saw the emergence of a vibrant philosophical spirit in salons, cafés and clubs—a spirit which in turn inspired and empowered the French people to rise up and overthrow a cruel and oppressive regime.  The 19th century, although politically turbulent, culminated in a grand celebration of creative expression and joie de vivre that would span two decades: the Belle Époque—the Beautiful Times.

The mythopoetic power of absinthe cannot be denied.  To the uninitiated, absinthe is often imagined to be some kind of deeply exotic, alchemical serum with potent hallucinogenic and aphrodisiac properties.  Frequently mentioned alongside of opium, LSD and more recently ecstasy, absinthe is sometimes wrongly named  “the acid of the Belle Époque,” but seldom by anyone who has ever had it.  Not surprisingly, the truth lies far from the myth, and the truth is that Absinthe is little more than a refreshing and exhilarating herbal liquor that can be compared to ouzo, raki, and Chartreuse.

When examining such a legendary and sensational topic, a historian will remain aware that there are three essential identities involved: the subject as known, the subject as inferred by historical remains and the subject as-wished-for; i.e., as it has entered and been interpreted by the imagination and popular culture of the present time.

Fortunately for those who care to look for it, there exists an abundance of historical and modern evidence of the true nature of this drink.  In fact, from time to time bottles of vintage, pre-ban absinthe will surface, still sealed, sometimes in near-mint condition.  These have been subjected to modern scientific analysis—not to mention the scrutiny of educated palates—and are again being manufactured by commercial and non-commercial distillers alike.  There also exist many contemporary accounts by those who not only imbibed absinthe, but some by those who manufactured it.  We know precisely how pre-ban absinthe was made and, in some cases, by what recipes.  It should also be noted that in secluded valleys of rural Switzerland, clandestine bootleggers have been making absinthe continuously since the ban.

All this notwithstanding, absinthe has maintained a mythical status in the popular mind, attended by some of the most outrageous, inaccurate and sometimes perplexing notions.